We truly thank you for taking the time to learn more about Quest.  Dave and Carmen

Tim is an Engineering Manager at Edwards Airforce Base overseeing a large number of employees.  He become a board member of Quest Ministries in 2009.

Dave is Founder and President of Quest Ministries. He began Quest Ministries in 1997. Prior to this Dave spent 3 years as an Area Director for Search Ministries Inc. and prior to that he was involved with Church ministry for 15 years.

Kevin is a Senior Medical Technologist at Antelope Valley Hospital. He has known Dave for over 30 years and was Dave's roommate for three years after college. He has been on of the board since 2005.

Christopher is a Brand Development Consultant and has worked in the marketing/communications industry for over 20 years. He is an original board member and has been part of Quest for over 19 years.

Curtis is the Missions Director at Faith Community Church in Palmdale, California. He is also the Women's Head Soccer Coach at The Master's College in Santa Clarita.

Retired from Chevron International Oil Company in 2012.  Mike was a maintenance supervisor and is presently living in Palmdale, California and assisting Dave with teaching and counseling. 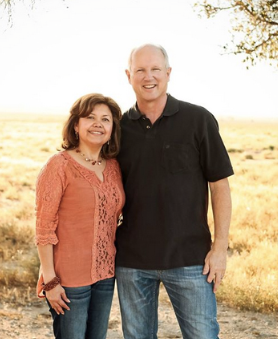 Dave Ludwig has been in full time vocational ministry for 29 years. For 12 of those years he was the Adult Education Director at a local church focusing his attention on church renewal, leadership training and discipleship. Since then he has presided over multiple church plants and as Founder and Director of Quest Ministries Dave has emphasized equipping believers in relational evangelism and apologetics. He has conducted numerous outreach discussion groups with lost individuals which are called Open Forums. Since starting Quest literally thousands of believers have been challenged to give their attention to reaching their friends and family with the gospel of Jesus Christ, through nurturing redemptive relationships.

Dave grew up in Orange County, California. He graduated from Biola University in 1979 with a degree in Christian Education and he continued his Christian training with a 2 year personal discipleship by a seminary professor. In 2010 his wife Linda went home to be with Lord after a 16 year battle with cancer. Dave has three children (Sarah, Daniel, Justin). In 2013 Dave remarried and is presently living in Palmdale with his wife Carmen. 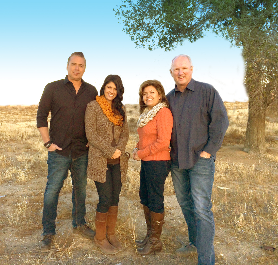 Christopher is a Brand Development Consultant and has worked in the marketing/communications industry for over 20 years. He is an original board member and has been part of Quest for over 14 years. In 2010 he joined Quest Ministries as a Communications Director.

Christopher and Dave have been friends for almost 20 years. It was through Dave's personal discipleship in the 90's that Christopher built his own personal conviction to applying God's word and through the process developed a similar ministry vision to evangelism, discipleship and apologetics. He and his wife Lisa live in Elizabeth Lake with their two children (Christian and Kiana) 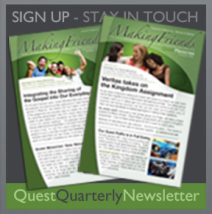 Signup for our Quest Quarterly Newsletter